MIPI specifications, including CSI-2®, DSI-2SM, RFFESM and others, are already prevalent in vehicles today. OEMs and suppliers have adopted them because they are well-proven and relatively simple to use, having been implemented in billions of mobile devices over the years. MIPI interfaces are used in automotive in high-resolution cameras; lidar and radar sensors; information, control and entertainment displays; telematics hubs; audio systems; data storage; and wireless chipsets providing access to cellular, Wi-Fi, Bluetooth and GPS.

By implementing these specifications, the automotive ecosystem is taking advantage of economies of scale, reducing costs and increasing choice. Fundamentally, automotive designs also benefit from the high performance, energy efficiency and high immunity to EMI effects that MIPI specifications provide.

MASS: Powering the Next Wave of Safety and Automation

Today, automotive technology is advancing faster than ever, and electronic components have never been more central to the design and success of new vehicles. Advanced driver-assistance systems (ADAS) and rapidly evolving in-vehicle infotainment (IVI) platforms are the stars of many new models, while autonomous driving systems (ADS) are a major focus of development. These innovations require more cameras, sensors, displays and computing resources from a growing ecosystem of suppliers. The data interfaces linking components together play an essential role in safety and security, which are core requirements of the new onboard systems. Standardization and its promise of interoperability are essential for automotive innovation to flourish.

MIPI Alliance is addressing these applications with MIPI Automotive SerDes Solutions (MASS), an end-to-end, full-stack of connectivity solutions for the growing number of cameras, sensors and displays that enable automotive applications. These solutions, with unprecedented functional safety and security built in at the protocol level, are designed to help automakers integrate new and emerging safety features such as low-latency backup cameras, lane-keeping and sign-detection sensors, and 360-degree camera, lidar and radar systems. MASS also supports multiple high-resolution instrumentation, control and entertainment displays.

MIPI A-PHYSM, the first industry-standard long-reach SerDes physical layer interface, forms the cornerstone of MASS. Its primary mission is to transfer high-speed data between cameras and displays and their related domain ECUs.  With additional supporting specifications, MASS allows proven higher-layer protocols from MIPI (such as MIPI CSI-2 and DSI-2) and third parties to operate over physical links throughout a vehicle, eventually eliminating the need for proprietary “bridges” and PHYs. For OEMs and system integrators, this equates to simplified networks and reduced costs, weight and development time. A-PHY was also adopted as an IEEE standard in June 2021 and is available as IEEE 2977-2021.

With A-PHY as the physical layer, the MASS protocol stack consists of the following:

MASS helps address functional safety over heterogeneous protocols and numerous topologies, including daisy-chaining. System-level engineers can use this architecture to build systems that meet ASIL (Automotive Safety Integrity Level) requirements at any level, from ASIL B to ASIL D.

The industry standardization offered by MASS is important for economies of scale, lower cost, and greater capabilities for automotive OEMs and their suppliers. 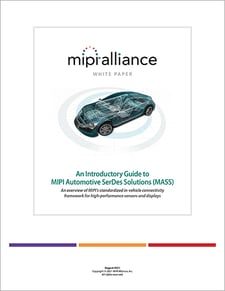