Making the 5G Vision a Reality

Scroll down to read "Making the 5G Vision a Reality" or complete the form below to download a PDF. 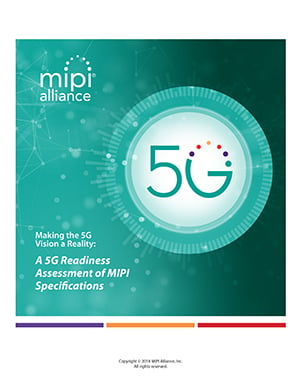 Making the 5G Vision a Reality

The MIPI Alliance’s mission is to develop the world’s most comprehensive set of interface specifications for mobile and mobile-influenced products. MIPI Alliance has always been at the forefront of defining state-of-the-art, low-power interfaces to support the key subsystems in advanced mobile platforms. These interfaces are largely invisible to consumers and other end users because they’re internal, such as between a device’s application processor and its camera and display. But these interfaces play a crucial rule in enabling the applications and experiences that people expect from smartphones, tablets and other mobile devices.

This 5G readiness is based on two factors:

One goal of this paper is to foster industry discussion about how existing MIPI specifications can be enhanced, and new ones developed, to enable the 5G devices, applications and use cases that will emerge over the next decade. To learn more about MIPI in 5G and to become involved, visit the 5G Application Area page.

This paper also discusses emerging 5G use cases. However, 5G’s implications for some mobile-influenced areas, such as automotive, wearables and IoT devices, are not completely known at this time. They will be evaluated and addressed in future MIPI papers. Please refer to Section 5 References for more information about 5G network technologies, emerging use case examples and industry trends.

2 5G Basics and Main Use Cases

By 2021, mobile data traffic will exceed 48 exabytes (EB) worldwide per month, a sevenfold increase from 2016, according to Cisco’s Visual Networking Index (VNI). One reason is because people are increasingly using smartphones, tablets and other mobile devices to watch videos, post on social media and do other things that once were done on PCs over wired connections. Another reason is the rise of the Internet of Things (IoT), a sprawling category of applications that includes smart utility grids, smart cities, autonomous vehicles, public safety and telemedicine.

These two trends are why between 2016 and 2021, mobile traffic will have a compound annual growth rate (CAGR) of 46 percent, which will be more than double the CAGR for fixed IP networks, Cisco’s VNI predicts. Fifth-generation (5G) cellular will both accommodate and enable that growth by supporting faster speeds, lower latency and greater scalability than 4G, also known as Long Term Evolution (LTE).

For example, 5G will support peak data rates of 20 Gbps, so it could accelerate the cord-cutting trend by giving consumers a new way to watch streaming video services such as DIRECTV NOW—including bandwidth-intensive 4K and 8K. This bandwidth also is ideal for connected car applications, such as the high-definition (HD) maps that autonomous and semi-autonomous vehicles will rely on. An HD map for a single neighborhood can be as much as 1 TB, so a vehicle traveling through a metropolitan area would need to download several maps per trip.

Standards work on 5G began in 2012, and the initial two versions were completed in late 2017 and early 2018. AT&T and SK Telecom are among the dozens of mobile operators worldwide trialing 5G and, in some cases, planning to launch commercial service by late 2018. The trials and standards work have progressed so quickly and so well that in early 2018, some analyst firms doubled their 5G forecasts. CCS Insight, for example, expects roughly 60 million 5G connections worldwide by 2020, 280 million by 2021 and 2.7 billion by 2025.

Figure 1 compares 5G (also known as International Mobile Telecommunications 2020) with 4G (also known as IMT-Advanced) in eight key areas. As the figure shows, 5G is superior in every category, including ones that consumers and businesses will notice. In fact, almost all user-experience-related metrics, such as throughput, have at least an order of magnitude (10X) improvement with 5G.

Other metrics are less noticeable to end users but just as important. For example, 5G uses spectrum more efficiently, which is key because it’s in chronically short supply worldwide. By 2020, countries in the Americas region, for instance, will need up to 1161 MHz of additional spectrum to meet demand, according to a GSMA-commissioned study. Even if regulators could free up that amount—which is more than double what most countries have licensed to mobile over the past 40 years—each operator still would have to pay billions of dollars, euros or yuan for the additional licenses. So by using spectrum more efficiently, 5G helps operators both meet demand and manage their overhead cost of delivering services.

Another example is speed though not in terms of data rates. 5G supports connections when the user device is moving at up to 500 km/h. This capability is crucial for connected car applications, as well as vehicles traveling at even higher speeds, such as bullet trains.

3GPP Release 15 (Phase 1) defines a peak 5G New Radio (NR) data rate of up to 5 Gbps, while Release 16 will support a peak data rate up to 20 Gbps. In everyday, real-world environments, each user could reasonably expect outdoor speeds of about 100 Mbps and 1 Gbps or more indoors, where 5G would be aggregated with Wi-Fi to create a fatter “pipe.” Figure 2 illustrates how 5G speeds are expected to evolve over the next several years.

The bottom line is that these per-user speeds are sufficient for bandwidth-intensive applications such as HD video. Streaming 4K TV services, 4K telemedicine and 4K video surveillance are examples of how 5G enables applications and use cases that are difficult or impossible with 4G. Another example is enabling fast downloads of HD maps to thousands of connected vehicles in a city simultaneously.

The initial versions of 5G were developed at the same time IoT started to become a phenomenon. Over 8 billion IoT devices were in use worldwide in 2017, up 31 percent from 2016, and the total will exceed 20 billion by 2020, Gartner says. Although many IoT applications are low bandwidth, the sheer number adds up to an enormous traffic load for mobile networks. Unlike 4G, 5G was designed from the ground up to shoulder that load alongside traffic from non-IoT applications, such as smartphones.

For example, 5G supports up to 4 devices/m2 with a throughput of 30 Mbps per device. In a high-density environment, such as a downtown business district or a smart city, 5G supports up to 200,000 devices/ km2 with each device getting up to 300 Mbps download speeds and 60 Mbps uploads. 5G also supports 1 million devices/ km2, an emerging use case referred to as massive IoT (mIoT) or massive Machine-Type Communications (mMTC).

5G has a latency target of 1 msec, which has multiple components and interpretations. In 5G standards, latency is defined as the round-trip time it takes data to traverse the 5G network, where the latency goal is under 4 msec for enhanced mobile broadband (eMBB) applications and 0.5 msec for mission-critical applications.

Figure 3 illustrates these latency targets. To achieve 1 msec end-to-end latency, the combined radio interface and the user interface latency should not exceed 0.5 msec. Meeting these targets enables 5G to support highly delay-sensitive applications such as telemedicine and mission-critical use cases such as public safety. These often are referred to as Ultra-Reliable, Low-Latency Communications (URLLC) applications.

2.2 5G Enables New Use Cases for Mobile, Automotive and More

Although capabilities such as ultra-low latency and ultra-high device density make 5G ideal for IoT applications, the new standard will spend its first few years powering smartphones. That focus is largely because the smartphone market is enormous and because consumers typically replace their device roughly every two years. Another reason is that as Figure 4 shows, smartphones will continue to drive the majority of mobile data traffic through at least 2022, and 5G gives operators new, much-needed capabilities for keeping up with that demand. Finally, most IoT applications are highly price-sensitive, and it will take several years for 5G to ride down the cost curve to the point that its modules are competitive with 4G versions.

As 5G smartphone adoption ramps up beginning in 2019, it will help drive the buildout of 5G networks, setting the stage for IoT applications to begin migrating to 5G sometime after 2020. Even in developed countries, 5G will take several years to achieve geographic coverage on par with 4G. But consumers, businesses and government agencies can begin buying and using 5G devices because the technology is backward-compatible with 4G. So when users are in areas where 5G hasn’t been deployed yet, their devices can still use LTE, which many operators will continue to expand and enhance through at least 2022.

Figure 5 provides a representative sampling of near- and long-term applications that 5G will enable. These can be grouped into three categories: eMBB, mIoT/ mMTC and URLLC.

Most eMBB applications and use cases center around people and involve video, such as 3D, 4K, augmented and virtual reality (AR/VR), and often combinations of those technologies. For example, multiple gamers in different parts of the world could use 5G-powered VR headsets to play against one another in immersive environments, or 5G-powered AR glasses that leverage the real world as part of a multi-player game. Another example is fans at a football game watching replays in 4K 3D on their smartphones, as a live feed from the player’s perspective generated by a camera mounted in the quarterback’s helmet.

This application area is mainly for a very large number of connected devices typically transmitting a relatively low volume of non-latency-sensitive data. The devices are expected to be low cost and support a very long battery life—at least 10 years.

Energy efficiency is key for enabling IoT applications—such as smart grid monitoring and control—where it would be time consuming and cost prohibitive to replace batteries on tens or hundreds of thousands of devices in the field every few years. Low cost, meanwhile, makes large-scale deployments financially viable and in turn ensures that the business or organization is able to collect enough data to make informed decisions.

These applications have very strict requirements for throughput, latency and availability. Some involve humans, such as telemedicine and autonomous vehicles—two use cases that highlight the life-and-death aspects of throughput, latency and availability. Other applications center entirely around machines, vehicles and sensors, such as real-time traffic management systems that use artificial intelligence.

MIPI Alliance was founded in 2003, right as 3G networks and devices were making their commercial debut in Europe and other parts of the world. Over the past 15 years, MIPI Alliance has played a fundamental role in enabling the applications and services that use 3G and 4G. For example, the first MIPI interface provided connectivity between application processors and cameras and displays, thus enabling the first camera phones and virtually every one since.

For example, over four years ago, MIPI Alliance released specifications that support 4K displays and high-performance cameras for applications such as smartphones and connected vehicles. At the time, 4K displays were rare, as were mobile networks capable of delivering video of that quality. So these specifications also are an example of how the MIPI Alliance has a long history of anticipating the marketplace’s needs years in advance so systems designers have the necessary interfaces for developing tomorrow’s solutions when they’re ready.

Systems designers use these and other MIPI specifications extensively for their 3G and 4G devices, so there’s no learning curve to implement them in their 5G solutions. That’s a prime example of how MIPI Alliance will help systems designers get their 5G products to market quickly and cost effectively. In fact, as of summer 2018 at least four major vendors were already using MIPI interface specifications for their initial 5G smartphones.

Another reason why MIPI specifications are ready to meet the first wave of 5G deployments is because they have a foundation in four “pillars” (Figure 6) that will be as valuable tomorrow as they are today: