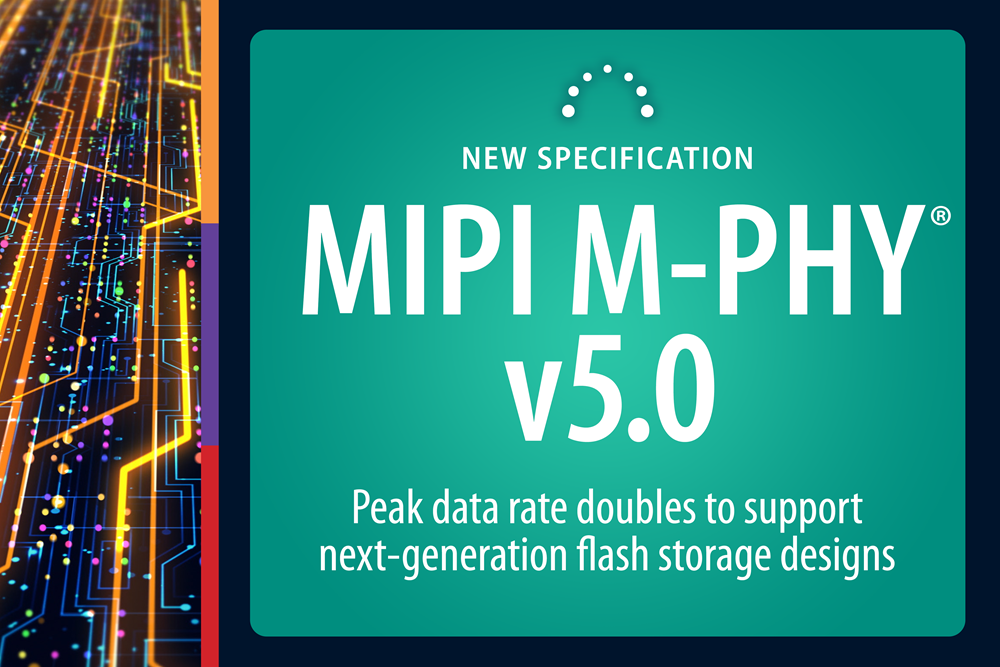 MIPI Alliance's versatile M-PHY® physical-layer (PHY) interface offers engineers configuration choices and the ability to address multiple markets and use cases with designs for interconnecting components in advanced 5G smartphones, wearables, PCs and even larger systems such as automobiles. A new update to the specification, version 5.0, doubles its peak data rate and positions M-PHY for the next generation of flash memory storage applications.

MIPI Alliance Chairman Joel Huloux in the press release said, “The significant data rate and flexibility updates delivered in MIPI M-PHY v5.0 are the product of real-world feedback from the large base of implementers in a broad ecosystem. Many of the enhancements in v5.0 come from our close relationship with the JEDEC UFS community, and such cross-industry collaboration is key to fueling and aligning innovation to better serve the global flash memory storage market.”

For example, just as JEDEC UFS users helped influence MIPI M-PHY v5.0 development, members of the MIPI M-PHY Working Group likewise created a specification-measurement scheme around reference-clock and jitter parameters that was delivered to JEDEC for inclusion in the UFS specification. “We wanted to offer this guidance since the UFS specification would be defining parameters that would have a direct effect on M-PHY’s performance," said Kirill Dimitrov, chair of the M-PHY Working Group. "This close collaboration ensures that the specifications are fully aligned and ready for implementation within the ecosystem."

The MIPI press release also notes that M-PHY v5.0, which is backward compatible through v4.1 of the specification, makes several legacy features optional to further enhance its latency performance and power efficiency. These revisions additionally make implementation of the interface smoother and faster for connecting flash memory-based storage, cameras and RF subsystems, and for providing chip-to-chip inter-processor communications (IPC).

An updated conformance test suite for v5.0 is scheduled to be completed in 2022, and the M-PHY Working Group is already at work on evaluating needs for the next version of the specification. For example, the requirements of the automotive industry will factor especially heavily in the specification’s evolution, and the working group hopes to see more original equipment manufacturers (OEMs) from that segment join the development effort. “We're particularly interested in additional guidance from carmakers so we can better understand their requirements and how those might be different from other ecosystems and other use cases,” Dimitrov said.

MIPI M-PHY v5.0 is available to MIPI Alliance members and can be downloaded from the member portal on the MIPI Alliance website. For more information, a brief MIPI Bytes video provides an overview of M-PHY and highlights its new features.