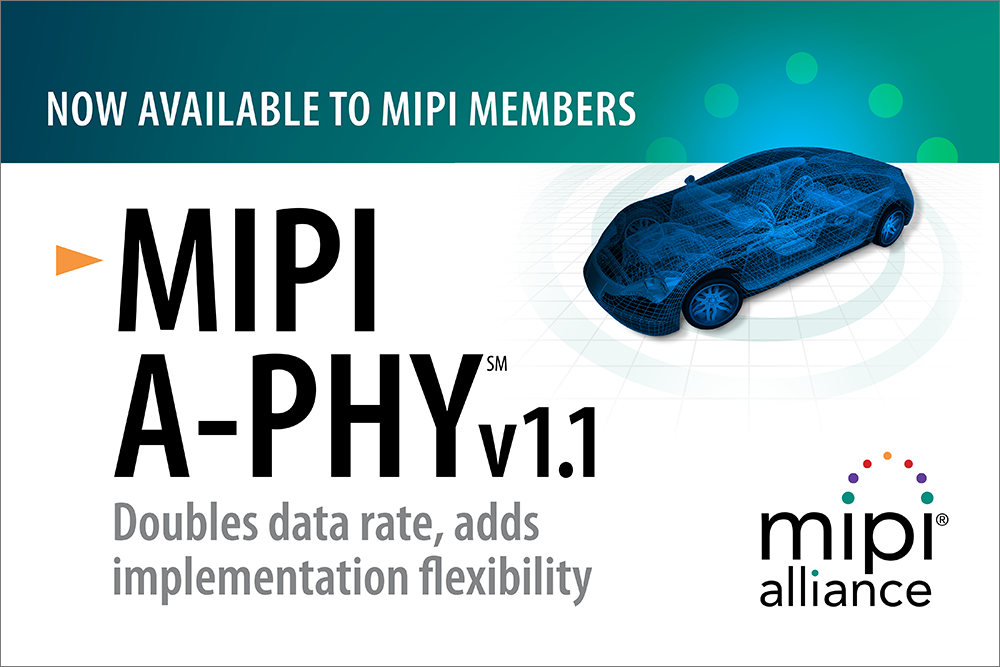 Updated specification will also be submitted for adoption as an IEEE standard.

PISCATAWAY, N.J., January 18, 2022— The MIPI Alliance, an international organization that develops interface specifications for mobile and mobile-influenced industries, today announced the release of MIPI A-PHY v1.1, the next version of the automotive serializer-deserializer (SerDes) physical-layer interface. Version 1.1 doubles the maximum available downlink data rate from 16 Gigabits per second (Gbps) to 32 Gbps and includes other enhancements to help automotive OEMs and their suppliers implement high-performance image sensors and displays in next-generation vehicles.

MIPI A-PHY, originally released in September 2020, is the first industry-standard, long-reach, asymmetric SerDes interface to provide high-performance links between automotive image sensors and displays and their associated electronic control units (ECUs). It was developed to simplify the integration of greater numbers of onboard sensors and displays for applications such as advanced driver-assistance systems (ADAS), digital cockpits, in-vehicle infotainment (IVI) and autonomous driving systems (ADS).

A-PHY offers a reach of up to 15 meters, unprecedented reliability with an ultra-low packet error rate of 10-19 over a vehicle's lifetime, high noise immunity and ultra-low latency. It also forms the foundation of MIPI's Automotive SerDes Solutions (MASS), an end-to-end framework for connecting cameras, sensors and displays with built-in functional safety, security and data protection.

The new version also adds a faster uplink gear with an available data rate of up to 200 Mbps, twice the rate of the existing uplink gear, providing more bandwidth for command and control of automotive peripherals. A-PHY v1.1 is fully interoperable with A-PHY v1.0, and devices using both specifications can coexist on the same network.

These enhancements enable automotive manufacturers to design next-generation applications that use the latest camera and display technologies, including higher-performance instrument clusters and infotainment displays, interior driver and passenger monitoring systems, virtual side mirrors and other ADAS, IVI and ADS applications.

Now that it has been formally adopted by the MIPI Alliance, v1.1 will be brought forward for adoption as an IEEE standard. In 2021, IEEE adopted A-PHY v1.0 as IEEE 2977-2021. IEEE is the world's largest technical professional organization dedicated to advancing technology for humanity.

To learn more about MIPI A-PHY, please join the virtual MIPI A-PHY Automotive Industry Forum, Jan. 26 at 8 a.m. PST, when A-PHY Working Group leaders will provide an overview of the enhancements in v1.1 and then gather feedback on requirements and proposed features for the next version of the specification. Representatives from automotive OEMs and Tier 1 suppliers are particularly encouraged to attend. Register for the forum.

The MIPI Alliance also hosted a virtual Automotive Workshop in November to provide more in-depth education on its MASS framework. Recordings of the sessions are available on the MIPI website. In addition, a white paper, “An Introductory Guide to MIPI Automotive SerDes Solutions (MASS),” offers an overview of each layer of the MASS framework.