MIPI Alliance Opens Access to its Debug and Trace Specifications 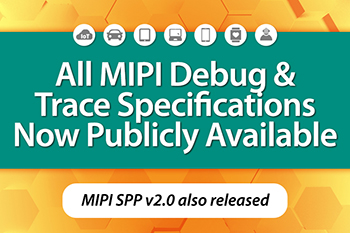 PISCATAWAY, N.J., September 11, 2019 – The MIPI Alliance, an international organization that develops interface specifications for mobile and mobile-influenced industries, today announced that its debug and trace specifications are now publicly available for download.

"Opening up access to MIPI debug and trace specifications will foster a more standardized debug environment, improving development processes and quality in and beyond the mobile device industry," said Joel Huloux, chairman of MIPI Alliance. "In addition to allowing more developers to use the specifications, this step will strengthen the ecosystem, leading to broader interoperability and a richer development environment.”

The nine available specifications include the following:

In conjunction with the public release of the nine debug and trace specifications, MIPI announced the availability of MIPI SPP v2.0. The specification introduces MIPI TinySPP, which is optimized for use with low-bandwidth and potentially high-latency interfaces such as MIPI I3C, the high-performance, low-power interface for links between sensors and application processors.

"The IoT explosion is creating demand for millions of small, low-powered devices, such as sensors, in mobile and mobile-influenced systems," said Enrico Carrieri, chair of the MIPI Debug Working Group and Principal Engineer in Debug Architecture with Intel Corporation. "With MIPI SPP v2.0, TinySPP extends SneakPeek so it can be used for efficient debugging of these devices."

MIPI SPP simplifies mobile device development by replacing the use of dedicated debug interfaces, such as JTAG, between a debug and test system (DTS) and a target system (TS). It abstracts the interface and uses the familiar mechanism of address-mapped read-and-write transactions to access components of the TS via memory agents. SPP can be used by multiple debug and test applications.

TinySPP introduces features that reduce the data transfer and overhead requirements for debug and test communications. These include a shorter minimum packet length of 4 bytes instead of 16 bytes, a smaller transaction byte field of 7 bits instead of 16 bits, and a short addressing system that reduces 64-bit or 32-bit addresses to 6 bits where possible.

In addition, MIPI SPP v2.0 defines packetized JTAG messaging. This messaging reduces the overhead involved in using JTAG to change state. New opcodes provided in both FullSPP and TinySPP eliminate the need for "bit-banging,” or exchanging long series of ones and zeros, which achieves the efficiency needed for low-bandwidth interfaces. SPP v2.0 can also use a single command to set up a polling loop rather than going in and out of shift state, which makes it better suited to high-latency interfaces.

MIPI SPP v2.0 and the other debug specifications are available for public download now.

MIPI Alliance encourages interested companies to consider joining MIPI to reap the full membership benefits, which include access to relevant licenses, and opportunities to participate in development activities, interoperability workshops and other events.