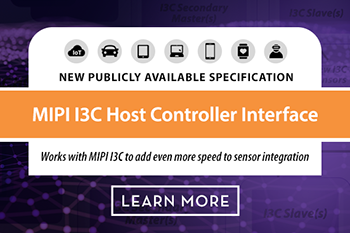 Smartphones and other devices have a rapidly increasing number of mechanical, motion, biometric and environmental sensors, which enable a wide variety of features and use cases that companies use to differentiate their products. This sensor proliferation creates significant design challenges, especially for software developers.

For example, without a common method for interfacing to MIPI I3C, every host controller must have its own system software or driver to support that piece of hardware. Every host controller implementation may also provide a different set of features and optimizations.

MIPI I3C HCI defines a common set of capabilities for the host controller and the software interface, allowing for the building of class definitions based on a common set of features. The definition allows for vendor-specific extensions and optimizations.

“The release of MIPI I3C in 2016 was an important milestone for developers because it brought together multiple sensor interface approaches around a unifying specification that provides conveniences and system-level benefits for many use cases and applications in mobile and beyond,” said Joel Huloux, chairman of MIPI Alliance. “Now, MIPI I3C HCI provides an additional set of benefits by offering a common software driver interface that allows implementers of MIPI I3C to focus on developing innovative sensor applications rather than the interfaces themselves.”

MIPI I3C HCI, now available for download, is also included in the soon-to-be-released MIPI Touch family of specifications, making it possible to use touch commands and multiple data streams to add differentiating touch features to a design. Application processor companies can apply the specification to standardize the HCI method used in their devices.

The specification defines several optimizations based on typical usage. For example, the combo command feature allows for the efficient one-shot transfer of write and then read transfers on the bus. Another example is auto command, which provides an efficient way to read a large data buffer related to in-band interrupt.

“MIPI I3C HCI paves the way to build a software ecosystem around MIPI I3C,” said Rob Gough, MIPI Software Working Group chair. “The specification provides an efficient means for platform software to interface to the features provided by the master device on the I3C bus and ensures power-efficient operation of the host controller. The end result – developers are freed up time to focus on integrating camera, touch and other components and features to differentiate their products.”

Organizations that download the specification are encouraged to join MIPI Alliance to realize all of the benefits that membership provides. Membership includes access to relevant patents and licenses, and opportunities to participate in specification development activities, interoperability workshops and other events.

Additional resources on MIPI I3C include the FAQs (“Frequently Asked Questions (FAQs) for MIPI I3C Version 1.0”); “A Developer’s Guide to MIPI I3C for Sensors and Beyond” presentation; a recent webinar; and a “MIPI Whitepaper: Introduction to the MIPI I3C Standardized Sensor Interface.”