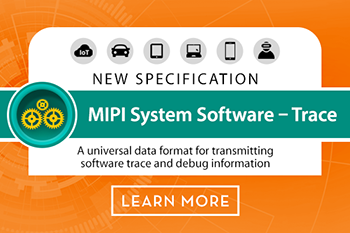 PISCATAWAY, N.J., April 26, 2018 – The MIPI® Alliance, an international organization that develops interface specifications for mobile and mobile-influenced industries, today released MIPI System Software Trace (MIPI SyS-T), a common data format for transmitting software trace and debug information between a test system and a device, such as a system-on-chip (SoC) or platform. The specification is publicly available to developers, and an accompanying example implementation library is accessible via GitHub.

Until now, available methods have been vendor-specific or based on major operating systems and there has been no independent format for exchanging debug information across software, firmware or hardware implementations. This fragmentation has been challenging for developers because devices typically incorporate software and components from different vendors, which increases debugging complexity and drives up development costs.

“MIPI SyS-T addresses a very real need in the debug and test industry for a universal data format that alleviates fragmentation and provides a convenient, vendor- and OS-agnostic solution for developers across the embedded software ecosystem,” said Joel Huloux, chairman of MIPI Alliance.

“By providing the MIPI SyS-T example implementation as open source through GitHub, our goal is to spur adoption of the specification in the developer community and, ultimately, broaden the reach of MIPI Alliance,” Huloux said.

MIPI SyS-T is scalable, applicable when debugging resource-constrained devices or robust, complex systems. Industries expected to benefit from the specification include wearables, smartphones, tablets and laptops as well as augmented reality/virtual reality (AR/VR), automotive systems and many other devices and applications.

“MIPI SyS-T benefits the many players in the mobile ecosystem,” said Enrico Carrieri, chair of the MIPI Debug Working Group. “Developers will find that MIPI SyS-T makes it easier to integrate their embedded software with underlying hardware that uses MIPI Alliance specifications. Hardware vendors will be able to use software solutions from more organizations. Debug and test tooling vendors can use the specification to offer generic testing products for developers and manufacturers.”

The specification includes the trace formatting method as well as an optional MIPI SyS-T Instrumentation Library, which includes APIs and documentation that developers can use to jumpstart their use of the specification rather than starting from scratch.

Developers can access MIPI SyS-T by visiting http://bit.ly/2HtAwG1, which provides a link to the specification and the GitHub resources. MIPI Alliance encourages developers to use, modify and share the example SyS-T library, provide feedback and interact with others in the user community.

MIPI® is a registered trademark owned by MIPI Alliance. MIPI SyS-TSM is a service mark of MIPI Alliance. All other trademarks cited are the property of their respective owners.