More than a hundred members from 35 MIPI Board and Contributor companies met last month at Member Meeting North America #61 to collaborate in working group sessions, learn more about the latest MIPI Alliance initiatives and participate in member events, including a Demo Day and a pilot test activity to further the development of a MIPI A-PHY® compliance program.

At sessions held 17-21 October, in Vancouver, British Columbia, the focus for MIPI working group participants was on advancing specification and resource development, continuing to align activities in priority areas such as IoT, security and automotive, and planning developer education and outreach.

Alliance members can follow working groups’ progress and view the latest MIPI Specification Roadmap in the Vancouver Post-F2F Highlights, which will be distributed in the next couple of weeks.

Launching the Week with MIPI Updates

Kevin Yee, Marketing Steering Group chair, followed with an update on marketing activities for new and upcoming specifications, as well as for the priority focus areas of automotive, IoT and security. Michele Scarlatella, MIPI IoT Consultant, introduced the work of the MIPI IoT Interest Group and its efforts to assess how MIPI’s existing specifications address current and future IoT market needs, and improve awareness with promotion targeting members and the developer community.

Next on the program, James Goel, chair of the Technical Steering Group, highlighted MIPI roadmap milestones such as the upcoming new security and audio specifications, updates to key camera and display specifications, and the pilot activity in the A-PHY compliance testing program. He also walked attendees through timelines and progress within each of the MIPI working groups.

Closing out the technical presentations was Niel Warren, chair of the Audio Working Group, who shared a historical look at the development of audio devices, as well as an overview of the group’s work and the distinctions between the MIPI SLIMbus®, SoundWire® and upcoming SoundWire I3S℠ specifications.

Congratulations went to members of the UniPro Working Group for the adoption of MIPI UniPro® v2.0. The specification award was accepted by the group's chair, Ramesh Hanchinal (right) of Synopsys, Inc., and vice chair Daisuke Sonoda (center) of KIOXIA Corporation, pictured with Peter Lefkin, MIPI executive director, at the Opening Plenary.

At its second Demo Day of the year, attendees were invited to tour the following member demos featuring MIPI specifications: 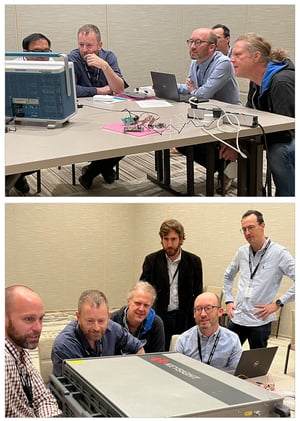 Also during the Vancouver meeting, MIPI took an initial step in evaluating the process for compliance testing of MIPI A-PHY implementations. Four member companies participated in the pilot activity – two test equipment vendors, one test facilitator and another providing the device under test.

Outcomes of the pilot activity will help in planning next steps in the development of the compliance program.

Enjoying the Company of Colleagues

For attendees ready for an evening off, the mid-week social event featured a sunset cruise around the Vancouver bay. The well-deserved break gave members the opportunity to enjoy drinks, dinner and conversation with colleagues while taking in the panoramic views of the city skyline and the surrounding coastal mountain range.

MIPI's next member meeting will be held 6-10 March, in Lisbon, Portugal. Registration will open in January 2023.