Raj Kumar Nagpal, interim chair of the MIPI PHY Working Group and lead of the MIPI A-PHY Subgroup, talks about how the PALs support A-PHY, as well as their contribution to the broader system of MIPI automotive connectivity solutions currently under development. 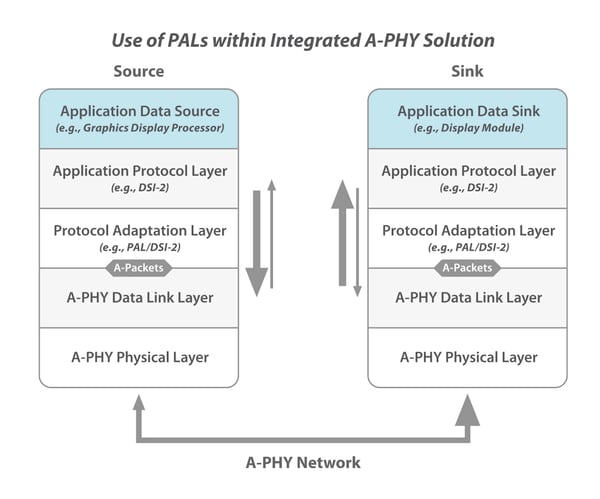 Q: What are the MIPI Protocol Adaptation Layers? What role do they play in the MIPI Automotive SerDes Solutions (MASS), and what challenges do they solve?

In vehicles today, there are many widely adopted higher-layer protocols that need to run across the automotive network to connect cameras, sensors, displays and other components with their associated ECUs (electronic control units). MIPI A-PHY is intended as a universal PHY for high-speed asymmetric data communication. You can think of the PAL specifications as the “glue” that defines the adaptations, flows and mechanisms for individual higher-layer protocols to be carried across A-PHY. They map the higher-layer protocols to A-PHY's A-Packet format and act as conduits to and from A-PHY’s generic data link layer.

In this way, the implementation of the higher-layer protocols becomes very smooth—“plug and play,” if you will—and evergreen for automotive designers all via A-PHY. The PALs are a small but crucial part of the MASS framework, which ultimately will provide automotive OEMs and their suppliers with an end-to-end, high-performance connectivity solution for the growing number of cameras, sensors and displays that they must support.

Q: For which protocols is MIPI developing PALs?

We have prioritized a number of MIPI and approved third-party protocols for PAL development. The first PALs, for I²C (Inter-Integrated Circuit) and GPIO (General Purpose Input/Output), were released earlier this month. PALs for MIPI CSI-2 and DSI-2, as well as for Video Electronics Standards Association (VESA®) DisplayPort™ and Embedded DisplayPort (DP/eDP), are scheduled to be introduced early this year. A PAL for Ethernet is currently under development, and a PAL for MIPI I3C® is planned as well. Additional PALs will continue to add to the flexibility and adaptability of A-PHY to provide support for whatever application innovations come to the global automotive industry in the future.

Q: What are the key features and benefits of the PALs?

The PALs are a key component for enabling different higher-layer MIPI and third-party protocols to connect over the end-to-end, interoperable A-PHY SerDes solution. They allow automotive designers to leverage de facto higher-layer protocols for connecting in-vehicle cameras, displays and other components, and they enable the integration of future protocol innovations using a standardized connectivity framework.

The PALs are a conduit, enabling these protocols to operate seamlessly over A-PHY, which offers very long reach, tremendous reliability, excellent data rate and ultra-high immunity to EMI (electromagnetic interference).

Q: What benefits do the PALs ultimately bring to system developers, OEMs and others in the automotive ecosystem?

The modular approach to the PALs helps designers reduce the cost of implementation. With the PALs and A-PHY, you are ready to efficiently implement the higher-layer protocols your applications require. Because of their similarity in structure, additional protocols are relatively easy to support, since you’re not building everything from scratch. Innovation can be sourced from a much broader group of suppliers, and your cost of implementation is contained.

Q: How is collaboration with other organizations important to building out MIPI’s portfolio of PALs?

Collaboration is key to our goal of enabling the use of A-PHY with the most common camera, display and other de facto interface protocols used in the wider industry today. For example, MIPI extended its liaison with VESA to develop the upcoming PAL for the DisplayPort and Embedded DisplayPort standards. Collaborating with other organizations that are undertaking related activities will create a very powerful ecosystem for the global automotive industry. The PALs are a perfect example of beneficial industry collaboration in action.