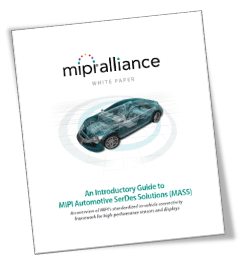 Automotive technology is advancing faster than ever, and electronic components have never been more central to the design and success of new vehicles. Advanced driver-assistance systems (ADAS) and rapidly evolving in-vehicle infotainment (IVI) platforms are the stars of many new models, while autonomous driving systems (ADS) are a major focus of development.

These innovations require more cameras, sensors, displays and computing resources from a growing ecosystem of suppliers, and the data interfaces linking these components play an essential role in safety and security, which are core requirements of the new onboard systems. Standardization of these interfaces and the promise of interoperability will be essential for automotive innovation to flourish.

MIPI Alliance recently published a new white paper that provides an overview of its standardized automotive connectivity framework for high‑performance sensors and displays, known as “MIPI Automotive SerDes Solutions,” or “MASS” for short. The paper explains how MASS is addressing the in-vehicle connectivity requirements of future automotive sensor (camera/lidar/radar) and display systems.

The paper explains how these components are implemented into the MASS protocol stack, describing in detail each component shown in the image below:

One key layer of the stack is the MIPI A-PHY Protocol Adaptation Layer (PAL), which defines the adaptations necessary to carry proven MIPI and approved third-party protocols over A-PHY links. The PAL maps those approved higher-layer protocols to A-PHY’s A-Packet format, acting as a conduit to and from A-PHY’s generic data link layer. In this way, the PAL enables higher-layer protocols to operate seamlessly over A-PHY physical links.

In addition to its technical focus, the paper also outlines the commercial benefits of adopting the standardized MASS framework in the following ways:

Read the full white paper online, or download the PDF for offline viewing.