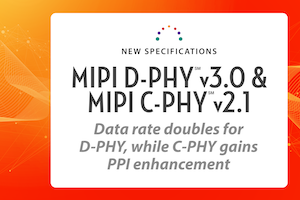 MIPI Alliance’s family of specialized, point-to-point, physical layer (PHY) serial interfaces support a variety of chip-to-chip, chip-to-camera and chip-to-display applications that require high bandwidth, low power and low electromagnetic interference (EMI) performance. Each of the PHYs offers unique advantages and features that collectively address the most essential interface requirements for mobile and mobile-influenced designs for use cases such as smartphones, the Internet of Things (IoT) and automotive.

MIPI D-PHY was the first MIPI PHY specification introduced more than 15 years ago. The new version of the specification, version 3.0, doubles the data rate of D-PHY’s standard channel to 9 Gigabits per second (Gbps), while extending its power efficiency by introducing a Continuous-Time Linear Equalizer (CTLE) on the receiver side of a connection. This major update to D-PHY enables the specification to support the latest ultra-high-definition displays and beyond, which is crucial given that pixel rates in such applications continue to increase. D-PHY v3.0 is fully compatible with previous versions of the specification.

The new version 2.1 of MIPI C-PHY delivers a 64-bit PHY Protocol Interface (PPI) to provide the option for a wider bus between the physical interface and a chip’s core logic for better support of higher-performance applications. The specification supports symbol rates up to 6 Gigasymbols per second (Gsps), equivalent to 13.7 Gbps, over the standard channel and up to 8 Gsps over the short channel. C-PHY v2.1 is fully compatible with previous versions of the specification. In addition, this minor update of C-PHY replaces objectionable terms with ones that more accurately reflect the functions of technical devices.

The virtual MIPI Developers Conference (DevCon), 28-29 September 2021, will offer technical sessions and member demonstrations delivering education and training on MIPI PHYs and other specifications for application spaces such as mobile, the IoT, automotive and 5G. Complimentary registration is available at mipi.org/devcon/2021/register.