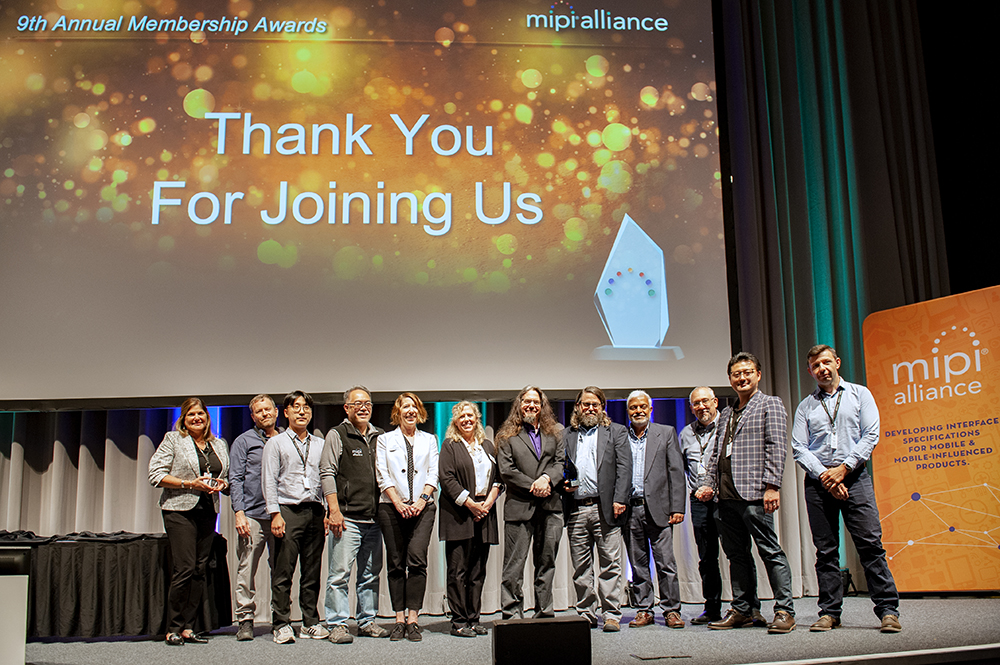 PISCATAWAY, N.J., and MUNICH, June 15, 2022 - The MIPI Alliance, an international organization that develops interface specifications for mobile and mobile-influenced industries, today announced the recipients of the 2021 MIPI Alliance Membership Awards. Continuing a tradition begun in 2013, members were honored for their outstanding contributions and leadership at MIPI’s ninth annual awards ceremony, held in conjunction with its 60th member meeting in Munich.

"The strength of MIPI Alliance lies in the dedication of its members, and we are proud to acknowledge the individuals and companies whose work has contributed significantly to the development of MIPI specifications that advance hardware and software integration in mobile, IoT, automotive and other areas," said Sanjiv Desai, chair of MIPI Alliance. "Through their technical skills, hard work and commitment to collaboration, these recipients have gone above and beyond to further MIPI’s mission and meet the needs of the industries we serve."

MIPI members have the opportunity to nominate individuals and companies for outstanding contributions and achievements. An awards and recognition committee reviews these nominations and recommends recipients to the MIPI Board of Directors, which approves the final honorees. This year’s program honored nine award recipients in five categories.

Three members received the 2021 Distinguished Service Award, which recognizes individuals impacting the MIPI specification development process or those contributing by serving on the board of directors, a working group or helping in the areas of marketing and testing:

The Working Group Leadership Award is presented to leaders within MIPI working groups in recognition of noteworthy contributions to the groups’ activities or specification development. Three individuals were recognized for their efforts:

The Special Achievement Award is presented to individuals for achievements and projects that may fall outside the criteria for other award categories. The 2021 award was presented to the MIPI Automotive Marketing Subgroup (AMSG) for its role in developing information and education activities to support the introduction of MIPI A-PHY and the MIPI Automotive SerDes Solutions (MASS) connectivity framework. MIPI leaders and support team members recognized for the effort included Kevin Yee of Samsung Electronics, AMSG chair; Dana Zelitzki of Valens Semiconductor; Rick Wietfeldt of Qualcomm Incorporated; Tim Dry, also of Samsung; Tom Wong of Cadence Design Systems, and Christina Slape, Ian Smith, Sharmion Kerley and Becky Obbema (Interprose) on the MIPI team.

The Legacy Award is a posthumous award honoring individuals for notable participation in MIPI Alliance. Dr. Earl McCune was recognized as a true leader in his field and within MIPI, authoring numerous specification sections and supporting documents, and serving as chair of multiple MIPI subgroups for more than 10 years. As an expert in EMI analysis, and a leader in the definition of link and communication quality, he contributed extensively to the first versions of the MIPI RFFE specification, which is now considered the de facto standard interface for control of radio frequency (RF) front-end (FE) subsystems. His legacy, both as a technical expert and a respected colleague, friend and mentor, will be remembered by all who knew him.

Photos and information about past recipients may be found at https://www.mipi.org/membership/annual-awards.