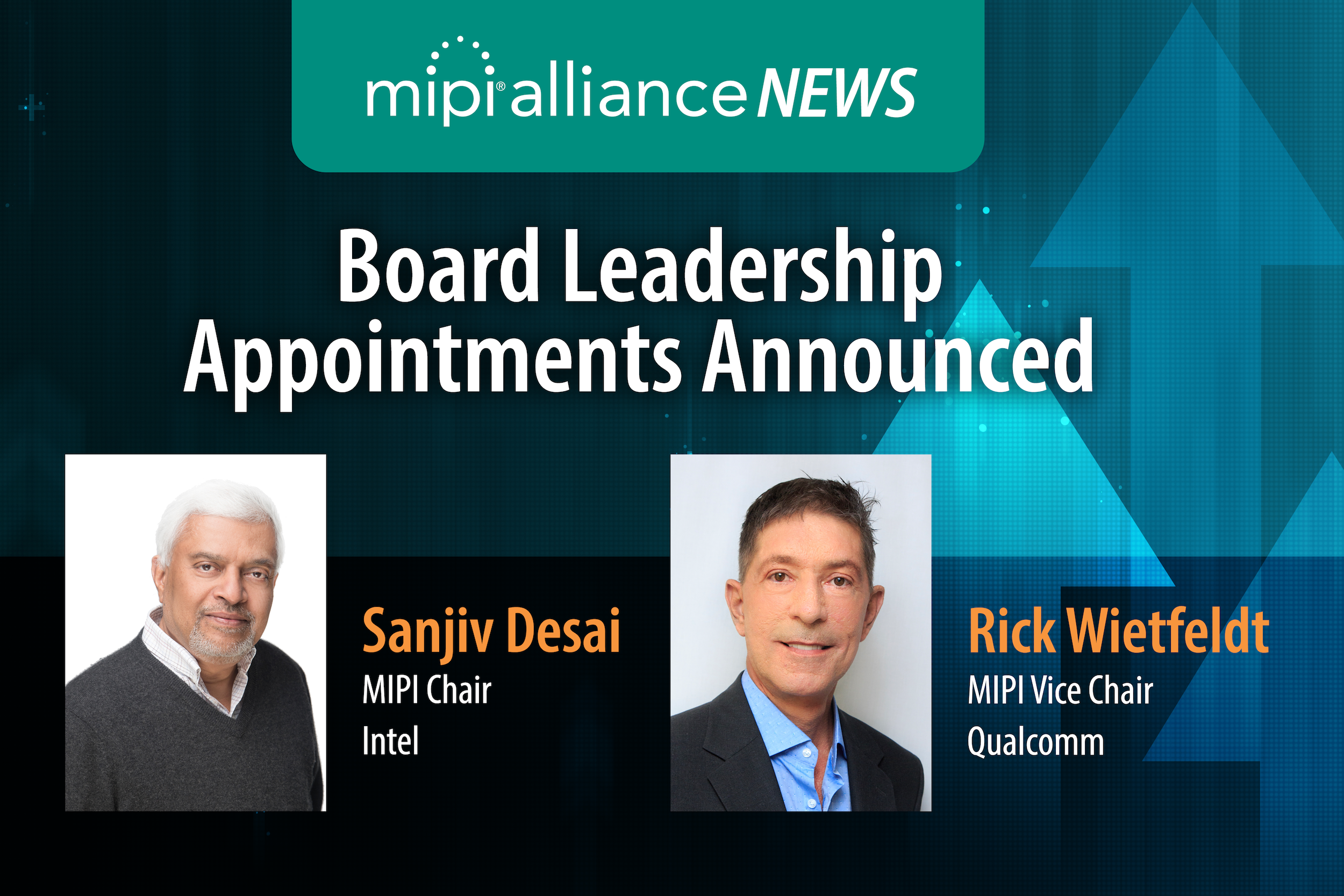 PISCATAWAY, N.J., April 5, 2022—The MIPI Alliance, an international organization that develops interface specifications for mobile and mobile-influenced industries, today announced the appointment of Sanjiv Desai, Intel Corporation, as chair of the MIPI Alliance Board of Directors. Desai, who had been vice chair since 2013, assumed the role from longtime chair Joel Huloux of STMicroelectronics, who has announced his forthcoming retirement. In conjunction with this transition, board member Rick Wietfeldt, Qualcomm Incorporated, was appointed vice chair.

The transition in board leadership became effective March 23, though Huloux will remain on the board until a new ST representative is appointed. In addition, Peter Lefkin was promoted to MIPI Alliance executive director and will continue to serve as board secretary. Hezi Saar of Synopsys Inc. remains as board treasurer, a role in which he has served since 2016.

Desai joined the MIPI board in 2006, first serving as treasurer and then stepping into the vice chair role in 2013. He has over 30 years of industry experience in various architecture and engineering management positions in the areas of central processing unit (CPU), chipset designs and platform development. Desai is a senior director in the Client Computing Group’s architecture team at Intel, responsible for defining Intel’s next-generation client platform architectures. He also leads Intel’s client platforms standards strategy development focused on wired interfaces.

“With his combination of industry and MIPI Alliance experience, Sanjiv Desai is well-equipped to lead the organization forward as more industries leverage mobile technologies in their designs,” Huloux said. “It has been a pleasure to be part of MIPI’s evolution since its early days, and I look forward to watching the organization continue to develop its technology roadmap to help drive further growth across mobile, the IoT (Internet of Things), automotive, industrial, 5G and other ecosystems.”

Wietfeldt has been actively involved in MIPI since it was founded and a member of the board of directors since 2018. He also currently serves as co-chair of the MIPI Security Working Group and was chair of the MIPI Technical Steering Group (TSG) from 2012 to 2018. He is a frequent presenter and author on technical subjects for the MIPI Alliance. For his significant contributions to various working groups and his leadership of the TSG, Wietfeldt was recognized with a MIPI Lifetime Achievement Award in 2014. He is currently a senior director, technology, at Qualcomm.

Huloux has played an instrumental role in MIPI since its formative days, serving on the board since MIPI's founding in 2003 and taking the chair position in 2008. Under his leadership, MIPI has grown to more than 350 members and adopted more than 50 specifications that have been implemented in billions of devices worldwide, including every smartphone on the market today. During his tenure, MIPI specifications also have been extended into multiple adjacent industries including the IoT, automotive and industrial, while numerous industry liaisons have further expanded MIPI's reach. For his efforts, Huloux was recognized with a MIPI Lifetime Achievement Award in 2013.

“Joel Huloux’s leadership of the MIPI Alliance has been exemplary,” Desai said. “His dedication to MIPI’s mission has been clear. By maintaining focus on the key requirements for mobile devices, Joel has steered the Alliance in the development of a comprehensive portfolio of specifications that are well-suited to an ever-broadening range of applications. I am honored to follow in his footsteps and continue this important work with our members.”

Lefkin has been providing leadership and guidance to the standards development community for more than 20 years. As COO/CFO for the IEEE Industry Standards and Technology Organization (IEEE-ISTO), he played a key role in the formation of MIPI Alliance and became its managing director in 2011. As MIPI's senior staff executive, he is responsible for all MIPI activities and operations, from strategy development to implementation.