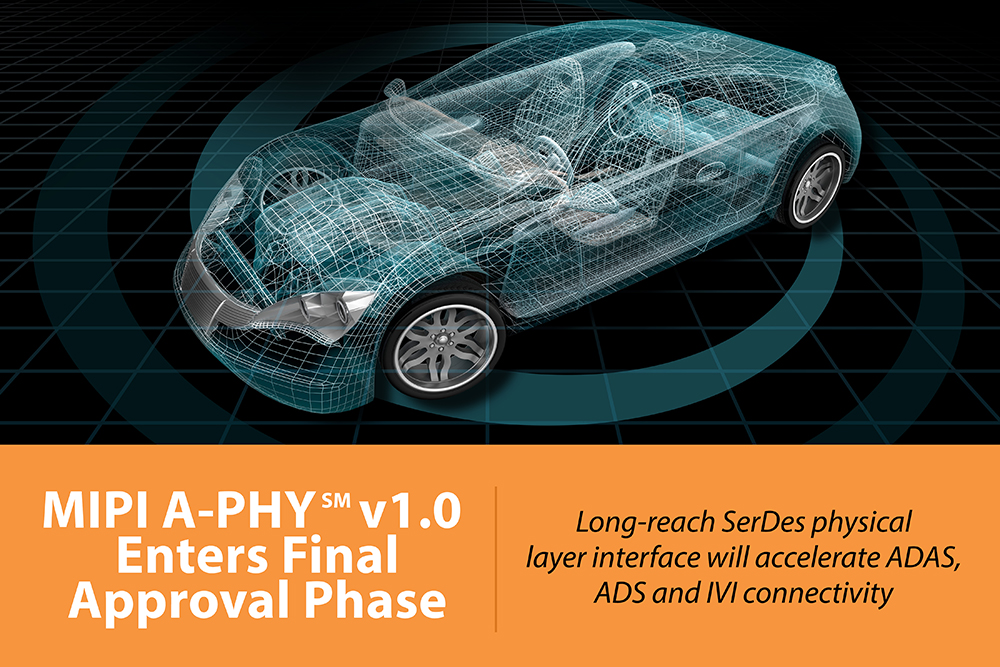 PISCATAWAY, N.J., June 3, 2020—The MIPI Alliance, an international organization that develops interface specifications for mobile and mobile-influenced industries, today announced that development has been completed on MIPI A-PHY v1.0, a long-reach serializer-deserializer (SerDes) physical layer interface for automotive applications. The specification is undergoing member review, with official adoption expected within the next 90 days.

A-PHY will provide a physical layer for data transfers spanning an entire vehicle. As the first standard of its kind, it will help the automotive industry accelerate the availability of advanced driver assistance systems (ADAS), autonomous driving systems (ADS) and other surround-sensor applications, including cameras and in-vehicle infotainment (IVI) displays.

MIPI A-PHY serves as the foundation of what will be an end-to-end system designed to simplify the integration of cameras, sensors and displays, while also incorporating functional safety and security. Higher-layer MIPI protocols, such as Camera Serial Interface (MIPI CSI-2) and Display Serial Interface (MIPI DSI-2), are already used to connect sensors and displays to domain ECUs and other onboard computers in many vehicles. They currently are transported over MIPI C-PHY or D-PHY shorter-reach physical layers and use "bridge" solutions to connect to proprietary long-reach PHYs. With the use of upcoming adaptation layers, these higher-layer protocols will run natively over A-PHY, eliminating the need for these proprietary bridges.

“A-PHY is a major milestone in the industry. MIPI is leading the charge to provide new interconnects that will help make cars safer and smarter for their operators,” said Joel Huloux, chairman of MIPI Alliance. “By offering a long-reach automotive wired connectivity solution, MIPI is building on its successful track record in the mobile industry, including its camera and display interface specifications, which are already prevalent in cars today.”

A-PHY is being developed as an asymmetric data link in a point-to-point topology, with high-speed unidirectional data, embedded bidirectional control data and optional power delivery, all over a single cable. Version 1.0 offers several core benefits:

MIPI A-PHY will allow designers to optimize systems for the performance, cost and complexity required by their use cases, providing scalability and flexibility to meet a broad range of speed and design needs. For integration with existing network backbones, A-PHY complements Ethernet, CAN, FlexRay and other interfaces.

The specification will allow OEMs, Tier 1 suppliers and component makers to gradually replace proprietary physical layers between onboard computers and the growing array of sensors, cameras and displays in vehicles. Having a standard long-reach PHY will improve economies of scale, simplify in-car networks, cut costs, and save space, weight and energy consumption.

In addition, MIPI Alliance will work with other organizations to leverage native protocols through a generic data link layer included with A-PHY. As one such effort, MIPI has extended its liaison with VESA and is actively developing an A-PHY adaptation layer for use with its DisplayPort and Embedded DisplayPort standards.

“The automotive market is an anticipated area of growth for VESA’s DisplayPort and Embedded DisplayPort (eDP) standards,” said Craig Wiley, senior director of marketing for Parade Technologies, VESA board member and a member of the MIPI Display Working Group. “VESA’s collaboration with the MIPI Alliance has been encouraged by the automotive industry to ensure a wide range of interface types and product compatibility across A-PHY. The support for DisplayPort and eDP in particular applies to the use of larger size panels, such as those we are seeing in automotive infotainment and center-console applications.”

To help ensure the interoperability of devices using A-PHY, a compliance test suite for testing developers’ implementations of the specification is already under development, and additional test resources and programs are being evaluated.

MIPI will be hosting a webinar, “MIPI A-PHY: The Cornerstone of a MIPI Automotive System Solution,” on June 30 at 8 a.m. PDT, and again on July 1 at 3 p.m. JST, to accommodate attendees in multiple time zones. To learn more and to register visit: https://bit.ly/3dswxcK.