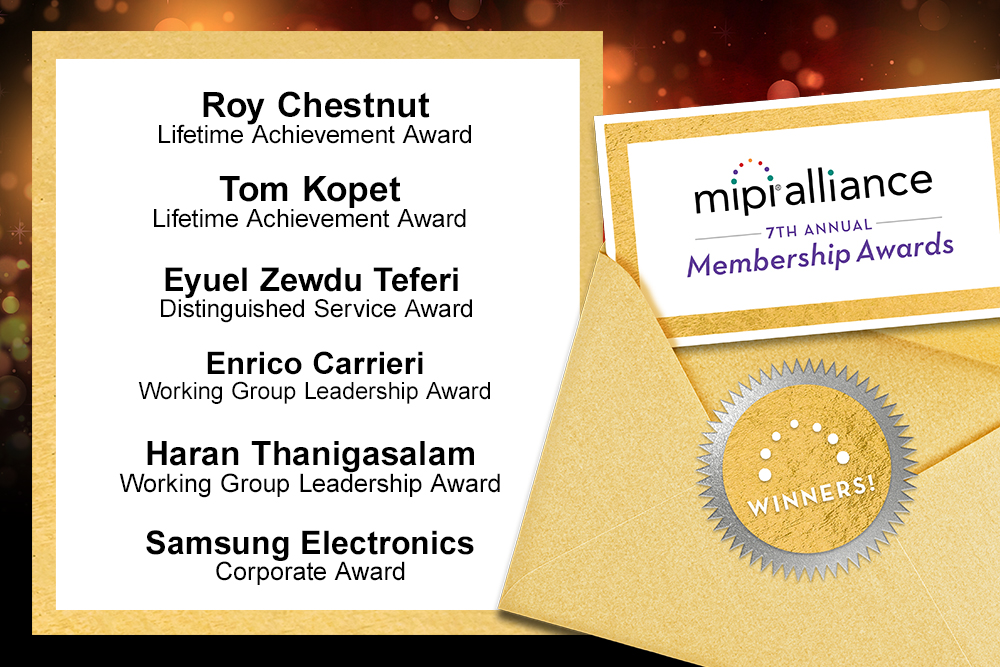 Awards presented for distinguished work advancing the organization’s specifications for mobile, IoT, automotive and other applications

PISCATAWAY, N.J., June 2, 2020 - The MIPI® Alliance, an international organization that develops interface specifications for mobile and mobile-influenced industries, today announced the 2019 MIPI Alliance Membership Award recipients. The awards were presented at a virtual State of the Alliance and Awards Ceremony.

“The MIPI annual awards program follows a tradition of recognizing individuals and companies whose dedication and contributions have made notable impacts in the development of specifications that advance hardware and software integration in mobile, IoT, automotive and other areas,” said Joel Huloux, chairman of MIPI Alliance. “MIPI greatly values its entire membership, and it’s rewarding to see firsthand the camaraderie and respect shared throughout the organization as we recognize key contributors to MIPI’s important specification development work.”

The annual awards program recognizes outstanding contributions and achievements by individual and corporate members. An awards and recognition committee appointed by the board of directors receives nominations from MIPI members and selects the recipients. This year’s program honored six award recipients in four categories: Lifetime Achievement, Working Group Leadership, Distinguished Service and Corporate.

The Lifetime Achievement Award is presented to individuals who have participated in MIPI Alliance efforts for at least seven years and provided significant contributions or leadership to a working group, the board or other MIPI entities. Two individuals were awarded this year: Roy Chestnut of Teledyne LeCroy and Tom Kopet of ON Semiconductor.

The Working Group Leadership Award is presented to leaders within MIPI working groups in recognition of noteworthy contributions to the groups’ activities or specification development work. Two individuals were recognized for their efforts this year:

The Distinguished Service Award recognizes individuals impacting the MIPI specification development process or those contributing by serving on the board of directors, a working group or helping in the areas of marketing and testing. Eyuel Zewdu Teferi of STMicroelectronics was awarded for multiple contributions to advance the development and adoption of the MIPI I3C and I3C Basic specifications. He was also recognized for his efforts to support collateral MIPI activities, including acting as a liaison to JEDEC, contribution to the MIPI I3C Conformance Test Suite currently under development and participating in interoperability sessions, while also staying abreast of emerging security issues.

The Corporate Award was presented to Samsung Electronics, Co., an active member of MIPI Alliance since joining in 2004. Samsung was honored for its leadership on the board of directors, as well as the Marketing Steering Group and Display Working Group. Participating in virtually every MIPI working group and having made significant contributions to MIPI CSI-2, C-PHY, DSI-2, UniPro and, in particular, D-PHY, the company was recognized for its ongoing proactivity and commitment to the Alliance. The company continues to support not only specification and resource development but also key efforts such as MIPI DevCon Seoul to help advance the adoption and enablement of MIPI specifications.

Also honored in memoriam during the ceremony were two individuals who made indelible contributions to MIPI Alliance:

Photos and information about past recipients may be found here: https://www.mipi.org/membership/annual-awards