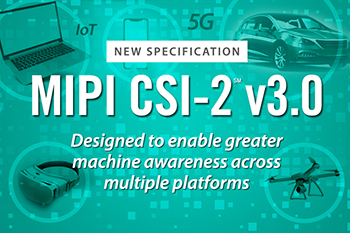 MIPI CSI‑2 is the primary interface used to connect camera sensors to application processors in systems such as smart cars, head-mounted augmented and virtual reality (AR/VR) devices, camera drones, Internet of Things (IoT) appliances, wearables and 3D facial-recognition systems for security and surveillance. Since its introduction in 2005, MIPI CSI‑2 has become the de facto specification for mobile devices. With each new version, MIPI Alliance has delivered crucial new functions driven by emerging imaging trends in mobile.

“We are continuing to leverage what we have done for mobile phones and expanding this to a much broader category of platforms,” said Joel Huloux, chairman of MIPI Alliance. “CSI‑2 v3.0 is the second installment in a three-phase development plan, through which we are effectively developing the imaging conduit infrastructure to enable machine awareness through sight. Our lives will be enriched as we better enable machines to assist us, and MIPI Alliance is developing the infrastructure to realize that future. We appreciate our members’ leadership in coming together over the years to collaborate on various use cases and drive development of CSI‑2.”

MIPI Alliance offers a comprehensive portfolio of companion specifications and tools in support of CSI‑2 v3.0:

MIPI C-PHY v2.0 was recently released to support CSI‑2 v3.0 capabilities, including support for 6 Gsps over the standard channel and up to 8 Gsps over the short channel; RX equalization; fast BTA; medium channel lengths for IoT applications; and an in-band control signaling option. MIPI D-PHY v2.5, with alternate low power (ALP), which uses pure low-voltage signaling instead of legacy 1.2 V LP signaling and a fast BTA feature for support of CSI‑2 v3.0, will be released later this year.