MIPI interface protocols are widely used in automotive to connect cameras, sensors, displays and other components to automotive systems on chips (SoCs). In a previous blog post, I detailed the automotive applications of MIPI CSI-2® and MIPI DSI-2SM, MIPI’s camera and display protocols, which have been broadly implemented in the industry. In September, the Alliance released MIPI A-PHYSM v1.0, the first asymmetric industry-standard, long-reach serializer-deserializer (SerDes) physical layer interface. In this post, I'll take a deep dive into MIPI A-PHY and provide a look at its key features and how they benefit some common automotive applications.

In addition to the benefits of standardization, A-PHY offers unprecedented resiliency and reliability, and allows OEMs, Tier 1 suppliers and component vendors to simplify and streamline camera, sensor and display integration. A-PHY extends the use of CSI-2 and DSI-2, as well as other upper-layer protocols throughout vehicles, while at the same time reducing cost, weight, complexity and time to market. 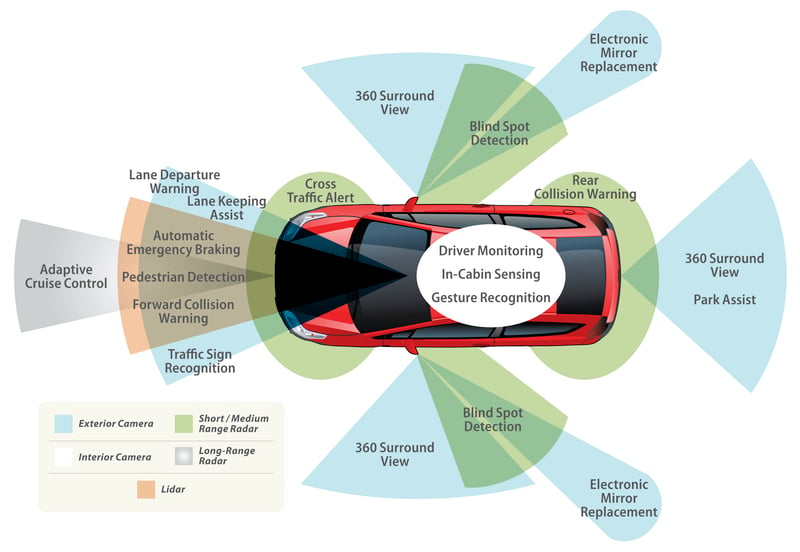 Regulation and market demand are leading automakers to introduce more and different types of sensors in vehicles.

Today’s proprietary long-reach SerDes options obligate suppliers to spend time and resources to fit a specific vendor solution, which slows down development of new architectures and the growth of the ecosystem. Standardization will allow component vendors, Tier1s and OEMs to focus on innovation, while also giving them greater choice, scalability and interoperability across the larger ecosystem.

Two possible applications of A-PHY—a high-resolution, low-latency rear backup camera and a front-facing camera for lane-keeping—show how the specification can help make cars safer. I'll give more details of those applications below. Other potential applications include virtual side mirrors; 360-degree camera, lidar and radar systems; and high-resolution instrumentation, control and entertainment displays.

MIPI A-PHY v1.0 provides an asymmetric data link in a point-to-point or daisy chain topology that includes high-speed unidirectional data, embedded bidirectional control data and optional power delivery over a single cable (coaxial or shielded twisted pair). Its primary mission in the automotive system is the transfer of data between cameras and displays and their related ECUs corresponding to ADAS or IVI functions. With a range of up to 15 meters, it ultimately will allow higher-layer protocols like CSI-2 and DSI-2 to operate directly over a physical link spanning an entire vehicle.

Prior to the release of A-PHY, CSI-2 and DSI-2 protocols implemented in cameras and displays have used MIPI C-PHYSM or MIPI D-PHYSM shorter-range physical layers connecting with SerDes “bridges” implementing proprietary long-reach PHYs. With the advent of A-PHY, automotive OEMs and vendors can now implement a standards-based long-reach SerDes solution in two phases, as shown in the diagram below.

Automakers and suppliers are expected to integrate MIPI A-PHY into their systems in two phases.

A-PHY v1.0 is available in two profiles and five gears to meet the performance, cost and complexity requirements of a broad range of different applications. The profiles and gears are interoperable.

These gears meet requirements for high-performance sensors and displays. For example, using Gear 5, which supports 16 Gbps, it would be possible to stream video in Ultra-HD 3840x2160 resolution at 60 frames per second. A-PHY also meets latency requirements for safety applications: In Gear 5, A-PHY v1.0 operates with a maximum 6 microseconds of latency.

A time-bounded PHY-level local retransmission scheme (RTS) for each A-PHY link recovers damaged A-Packets for a steady connection. The RTS mechanism is local to a single-hop A-PHY, such that the link layer is not aware of it. The RTS provides ultra-high immunity to EMI effects: MIPI Alliance testing at an independent lab has shown A-PHY links can retain a high level of immunity after years of mechanical stress and aging of cables. This feature contributes to A-PHY's low packet error rate of <10-19, which is equivalent to less than one error over the lifetime of the vehicle. The low overhead of the RTS contributes to A-PHY's approximately 90 percent net data rate in the upper gears, a higher efficiency than other protocols can achieve.

MIPI Automotive SerDes Solutions (MASS) establishes a full-stack solution that will include A-PHY, PALs, upper-layer protocols, and service extensions that add end-to-end functional safety and security features, including high-definition content protection (HDCP) for display applications. The majority of the MASS specifications have been completed or are nearing completion and will be rolled out over the first half of 2021.

MIPI A-PHY can serve as a long-reach physical interface from a rear backup camera to an ECU, and from the ECU to a display, with features to ensure reliable image transmission.

In both examples, functional safety and security functions are implemented at each point in the chain to ensure an ultra-low error rate and end-to-end protection against intentional or unintentional tampering. These closed-loop MASS implementations ensure the image sensors or displays work reliably, which is especially important for these types of critical use cases. In both scenarios, A-PHY's low latency and high data rate enable high-quality image transfers under strict timing requirements.

A-PHY v1.1, already in development, will double the maximum downlink data rate in Gear 5 to 32 Gbps by supporting dual downlinks over star quad cables. It will also double the uplink speed to 200 Mbps. In addition, A-PHY v1.1 will add PAM4 encoding to lower gears, so OEMs, Tier1s and suppliers working with lower cost connectors and cables will be able to take advantage of higher noise immunity.

Where to learn more

Additional information on MIPI A-PHY, including a webinar and recent MIPI DevCon presentations, are available at mipi.org.