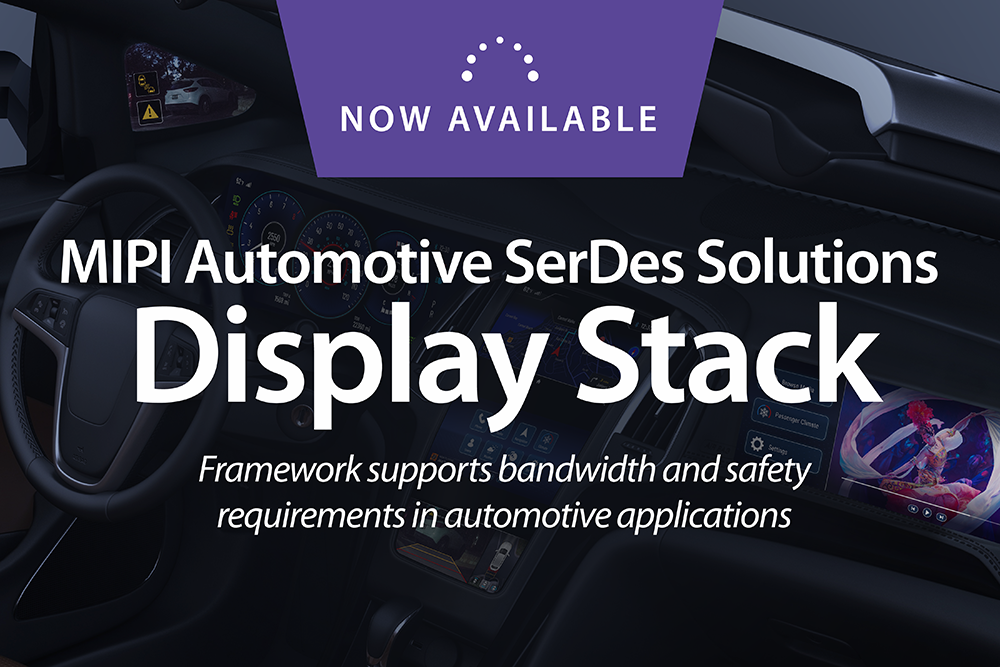 Current trends in automotive electronics are accelerating the demand for more in-vehicle displays with higher performance. Advanced driver-assistance systems (ADAS) and autonomous driving systems (ADS) bring more cameras and sensors, generating richer streams of display data that require interfaces with high bandwidth, low latency and functional safety. The transition to digital cockpits and ever more immersive forms of in-vehicle infotainment are further increasing the number of display data streams, generating a need for even more bandwidth and, in some cases, for content protection.

The display stack specifications are important components of MASS, an overarching standardized framework for connecting automotive sensors (e.g., camera/lidar/radar) and displays to their associated ECUs, with built-in functional safety and security support. 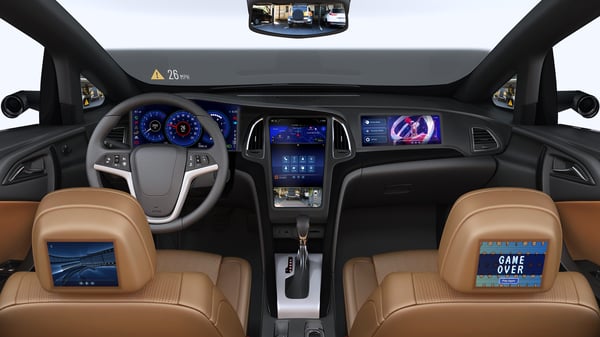 The introduction of ADAS applications, digital cockpits and connected in-vehicle infotainment has generated a need for more in-vehicle displays. 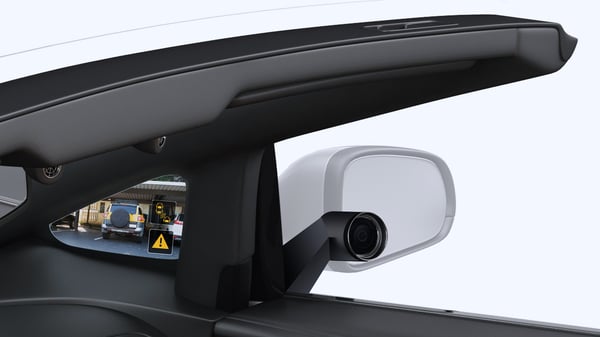 Virtual mirrors, 360-degree views and head-up displays are just a few of the applications enabled by MIPI automotive display specifications.

Currently, there are many in-vehicle display applications that can be implemented more effectively using the MASS display stack. One emerging application is virtual side-view mirrors, which replace the bulky mirrors on each side of the car with camera housings that take up less space and improve aerodynamics. The high-resolution cameras constantly stream live video to the displays at each corner end of the dashboard. Similarly, the display stack can help support a new generation of high-performance rear-view backup display systems, as well as displays fed by 360-degree camera arrays surrounding the vehicle. Another application is head-up displays that are projected on the inside of the windshield for driver assistance and alerts.

Using A-PHY as a foundation, the MASS display stack provides everything needed for reliable, source-to-sink connectivity between automotive displays and processors. 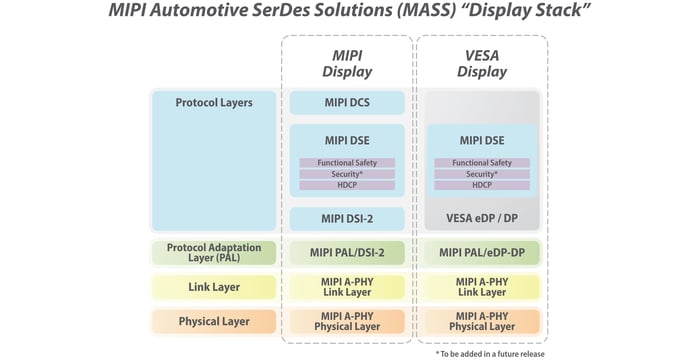 MIPI A-PHY, the physical layer of MASS, is designed primarily for long-reach connectivity between sensors (e.g., camera/lidar/radar) and displays and their associated electronic control units (ECUs). Operating at the edge of automotive networks to connect peripheral components that require high-speed asymmetric data transmission, it complements full-duplex backbone protocols such as automotive Ethernet. It removes the need for proprietary PHYs and can be implemented in a point-to-point or daisy-chain topology. As A-PHY can be integrated directly into sensors, displays and their associated ECUs, it will ultimately eliminate “bridges” between short-reach and long-reach PHYs, allowing simplified networks, quicker time to market and reduced cost and weight.

The stack includes new protocol adaptation layers for MIPI DSI-2 (PAL℠/DSI-2℠) and VESA eDP/DP (PAL℠/eDP-DP). Like other PALs that have been introduced or are in development, these allow higher-layer protocols to establish direct connections over A-PHY—in this case, for DSI-2 and eDP/DP display traffic to be transferred over an A-PHY network.

The next critical piece of the MASS display stack is the MIPI Display Service Extensions (DSE) specification, which defines functional safety, data protection and other service enablers for automotive display data streams, and the format that helps to make them available.

The content of a display stream can be converted to or from the SEP format by MIPI A-PHY bridges or, in the case of integrated A-PHY, by the display source or sink itself, allowing for end-to-end links. The SEP container allows for content delivery between MIPI and eDP/DP display devices. This lets OEMs and system integrators develop heterogeneous display systems, reducing complexity and cost.

SEP also defines the format for supporting an optional HDCP service over display links. HDCP, which is supported in both MIPI DSI-2 and VESA eDP/DP, is designed to prevent unauthorized copying of display content, which may include in-vehicle entertainment as well as maintenance data and software updates.

Through the development of future MIPI security specifications and updates to MIPI DSE, expected in the first half of 2022, the MASS display stack will gain security enablers for confidentiality, integrity and authentication.

Enabling the future of display

As automakers prepare to integrate a wave of new display applications into the next generation of vehicles, these standardized display interfaces will streamline development, and reduce cost and complexity. With A-PHY and this comprehensive set of specifications that support functional safety and security, the MASS display stack represents a significant step in this new evolution in edge connectivity.

Following closely after the introduction of the MASS display stack, MIPI Alliance will soon release MIPI DSI-2 v2.0, the next major version of the display protocol. With this version, DSI-2 will gain several new features relevant to automotive applications, including support for greater pixel depth, the latest VESA Display Stream Compression (DSC) and Display Compression-M (VDC-M) codecs, and new video formats and features that improve efficiency, reliability and the user experience. These features include seamless transitions from Video Mode (active streaming) to Command Mode (static display), which improves display efficiency and user experience; and Adaptive Refresh Panel, which enables displays to save energy by retaining an image for a longer time under some circumstances.

To gain access to all MIPI specifications and contribute to the development of future standards, consider joining MIPI Alliance.