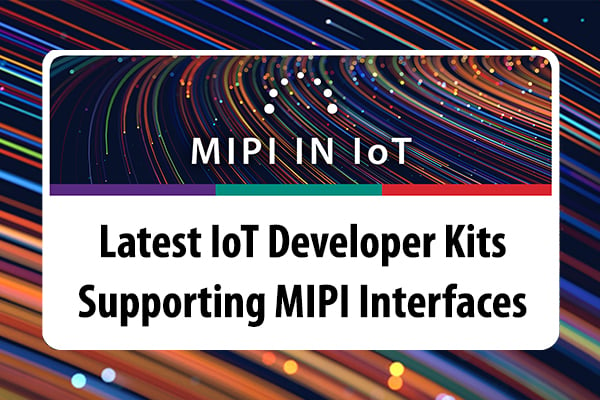 It's been more than 12 months since we published our last blog post highlighting popular IoT developer kits that support MIPI camera and display interfaces. Since then, a number of new kits have been launched that support other MIPI interfaces, including MIPI I3C® (the successor to the I2C interface) and JEDEC Universal Flash Storage (which leverages MIPI M-PHY® and MIPI UniPro®), in addition to the already widely adopted MIPI CSI-2® camera and MIPI DSI®/DSI-2℠ display interfaces.

This blog highlights some of the notable kits new to the market over the last year (and one particular kit missing from the previous post). I’ll explain which MIPI interfaces they support and describe how the use of these interfaces can benefit the IoT developer community.

Advanced high-resolution cameras and displays are at the core of many IoT devices, enabling ever more sophisticated vision-based applications and enhanced user experiences. It is no surprise that many of the latest IoT developer kits are supporting even greater numbers of MIPI camera and display interfaces to support 360-degree machine vision and multiple embedded displays.

The adoption of these MIPI specifications has fostered interoperability between camera and display component vendors and resulted in a huge vendor community, which in turn has significantly lowered costs, widened choice, and reduced complexity for developing and integrating advanced cameras and displays within electronic devices. The array of available MIPI-compatible camera modules is staggering and includes low-, medium- and high-resolution standard cameras, monochrome infrared cameras, stereoscopic cameras and 3D time-of-flight cameras. A similarly impressive range of DSI-2-compatible displays is also available, with multiple screen sizes and resolutions. With such a range from which to choose, developers can easily match camera and display modules to meet their specific target use cases.

Developer communities have also built up around these camera and display specifications, providing software tools and other resources such as example code and drivers to help developers get started with the interfaces.

Launched in 2021, the Portenta H7 Lite targets industrial IoT applications. It is a lower-cost version of the original Portenta H7, Arduino’s first kit to support a MIPI DSI display interface. Support for DSI in the H7 Lite enables this single board computer to be connected to a huge range of MIPI DSI-compatible embedded display modules.

Absent from the last blog, but very worthy of inclusion in this article, is the Arduino MKR Vidor 4000, which is Arduino’s first product to support a MIPI CSI-2 camera interface. Supporting both an Intel FPGA and ARM M0 microprocessor, this kit provides the processing power for complex machine vision applications that capitalize on the use of advanced CSI-2-compatible image sensors.

The original Asus Tinker Board single-board computer was launched by Asus in early 2017 and in November 2020, Asus launched an updated version, the Tinker Board 2. In addition to supporting a more powerful CPU, GPU and faster RAM, this version now supports a four-lane MIPI DSI interface that supports data rates up to 6 Gbps and display resolutions up to FHD.  The new kit also supports a two-lane MIPI CSI-2 interface, supporting data rates up to 3 Gbps.

The low-cost Raspberry Pi Zero 2 W was launched in October 2021 as part of the hugely popular Raspberry Pi series of single-board computers, which have sold over 37 million units since their inception in 2012. As with all generations of the Raspberry Pi (except the Pi Pino), this new kit supports a MIPI CSI-2 camera interface.

MIPI I3C is the successor to the popular I2C interface and can be used to connect sensors and other ancillary components to an application processor.  Just like I2C, MIPI I3C is implemented with standard CMOS I/O pins using a two-wire interface; but unlike I2C, I3C supports (among other logical addressing) in-band interrupts enabling target devices to notify controllers of interrupts. This design feature eliminates the need for a separate general-purpose input/output (GPIO) interrupt for each target component, which reduces system cost and complexity. I3C supports a standard net data rate (SDR) of 11.1 Mbps (at 12.5MHz) with options for high-data-rate (HDR) modes up to 33.3 Mbps. The net result is that I3C offers a leap in performance and power efficiency compared with I2C.

Some of the latest and most powerful IoT developer kits coming to the market are now supporting the MIPI I3C interface.

NXP’s comprehensive range of i.MX application processors are targeted at advanced multimedia and machine learning applications with high-performance and low-power consumption requirements. The i.MX 93 is the latest processor to be launched in this range and is supported by a number of reference design kits. This new processor is notable in its support for the MIPI I3C interface, as well as a four-lane MIPI DSI interface, capable of driving 1080p60 display resolutions, and a two-lane MIPI CSI-2 camera interface that enables direct connection to external camera modules and image signal processors.

Another new NXP microprocessor supporting MIPI I3C is the S32K3, which launched in November 2020 and specifically targets automotive applications.

JEDEC uses MIPI UniPro to provide the interconnection layer for its Universal Flash Storage (UFS) standard, which also leverages MIPI M-PHY as its physical layer interface. UFS is already being used in many types of smartphones today, and we are now seeing it in IoT developer kits, superseding the use of older flash storage technologies such as SD and eMMC.

Many other developer kits on the market today support MIPI camera, display, I3C and other interfaces. A non-exhaustive list of kits that support one or more MIPI interfaces is provided in the table below.

It is clear that the high speed, lower power and low complexity MIPI CSI-2, DSI/DSI-2 interfaces are widely supported by many IoT developer kits – from basic kits costing just a few dollars, to powerful high-end kits supporting the very latest AI and machine-vision-capable hardware. We’re also seeing IoT developer kits coming to the market that support MIPI I3C and JEDEC UFS (which leverages the MIPI UniPro and M-PHY specifications), and we expect the number of kits supporting these capabilities to increase in the coming years.

All the kits described in this article are supported with high-quality developer resources including tutorials, software tools, example code and developer forums, making the MIPI interfaces accessible to the developer community and easily leveraged for any application that requires a camera, display, high-speed sensory or flash memory capability.

Please note: The inclusion of a product in this blog post does not represent an endorsement of the product by MIPI Alliance or guarantee the product’s compliance or conformance with MIPI specifications. The list provided above is not intended to be all-inclusive. Manufacturers who have introduced in the last year a product that supports MIPI specifications are encouraged to contact MIPI at admin@mipi.org with relevant details for potential addition to the list.